In 2014 a Bay of Islands community group Fish Forever published a community consultation document that proposes the protection of 10% of the enclosed waters of the Bay of Islands with no-take marine reserves.

Fish Forever's purpose in putting out the document was to generate constructive public discussion around the marine protection objectives and benefits as well as concerns and to further investigate support for the specific sites proposed. 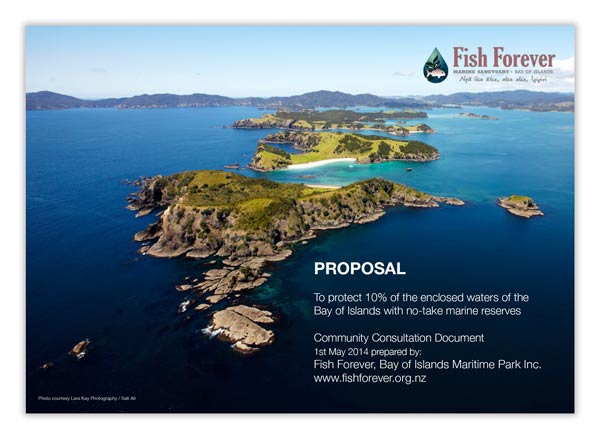 The potential sites, named the Waewaetorea Reserve and the Maunganui Reserve, are the outcome of five years consultation with community and the hapu of Rawhiti. The background work to the discussion document by Fish Forever included a public survey that gave the community an opportunity to suggest where reserves should be located in the Bay of Islands. The areas that are proposed were top choices both from the popular and scientific perspectives. They cover 6.3% of the Bay of Islands waters.

Read the Fish Forever introduction to the Discusion Document. 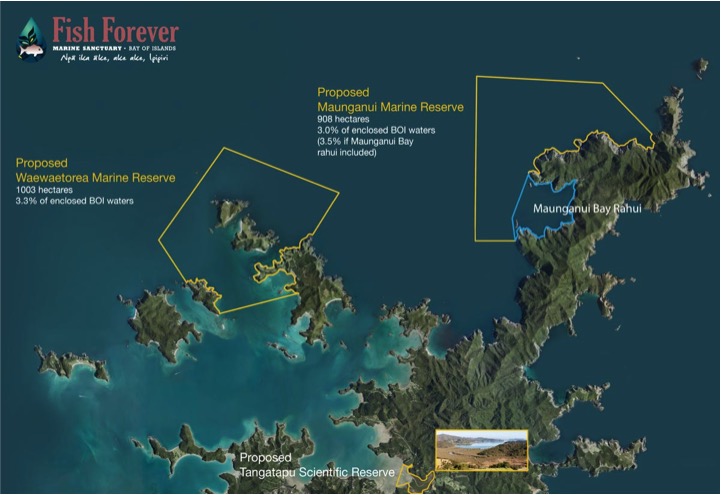 Fish Forever in taking on its challenge set out to achieve its marine protection goal via a process of bringing together the Bay of Islands community. The group initially sought guidance from the two hapu holding mana moana at Rawhiti, Ngati Kuta and Patukeha ki te Rawhiti. This relationship and discussion continued over four years and included a series of meetings to share information and examine the marine reserve concept and where they might be placed in association with other customary management areas, specifically mataitai areas and the established Rahui at Maunganui Bay. A highlight of this work was the combined Fish Forever Hapu trip to Te Taupuwae o Rongokako Marine Reserve and the stay at the Whangara marae with the Ngati Konohi people. Much was learned about their vision of using the marine reserve as a Kohanga (nursery area) for restoration alongside a mataitai area designed to support the harvest needs of the community and manage the spill-0ver benefits of the marine reserve.

Resulting from the work with the hapu the discussion document was for the areas to become fully no-take reserves with a generational review (25 years). This was first achieved by Ngati Konohi in the establishment of Te Tapuwae o Rongokako Marine Reserve.

Other work had begun undertaken on supporting the design of Mataitai areas that would manage spill-over from the reserves and best support customary practice in the rohe. Fish Forever also was active and remains actively involved in project work and research supporting the Rahui at Maunganui Bay.

In 2014 Fish Forever was of the opinion that it needed to respond to pressure withing its membership and the community in general to make public the work that had been done to formulate a proposal and thus the discussion document was the proposal was published with the intention to facilitate a community discussion on this important matter. Unfortunately at the time the discussion document was released the Hapu leaders took a position of not supporting the proposal and withdrew from the partnership work. As a result Fish Forever decided to put the proposals on hold until the partnership effort can be restored with the hapu. Fish Forever is as before continuing to support the Hapu with various initiatives, most significant being the rahui at Maunganui Bay.

Fish Forever has a comprehensive web site with a lot of useful and valuable information spanning the many years of work on its marine protection objectives in the Bay of Islands. Go to the Fish Forever web site.

We have gathered together here the key documents supporting the Fish Forever research and consultation effort.