A marine reserve
A whale sanctuary
A New Zealand fur seal sanctuary
Five customary fisheries areas (two taiāpure-local fisheries and three mātaitai reserves)
An advisory committee
Fishing regulations that are specific to the area
The Bill implements the various management measures together as one integrated package. 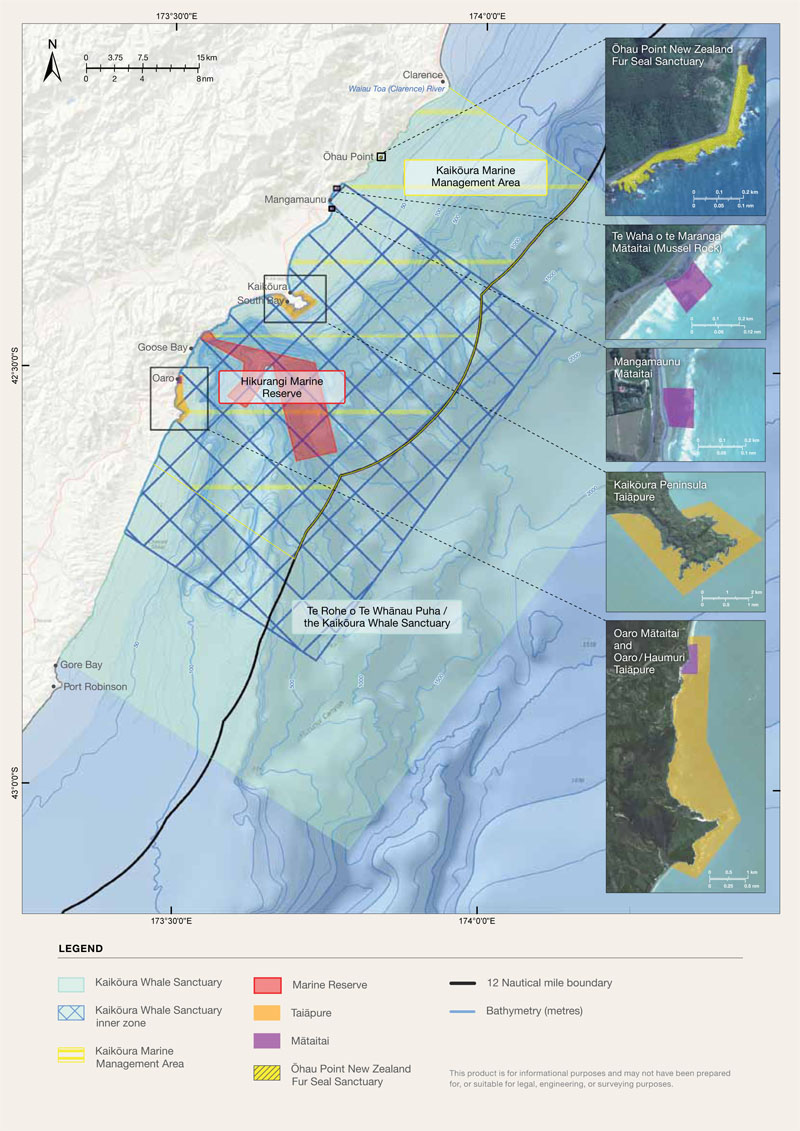 The new marine protection measures are:

A total of 10,416 hectares focused on the very deep waters of the canyon and connects with the land for about two kilometres just north of Goose Bay and extends out to 23.4 kilometres. No mining, fishing or harvesting of any kind would be allowed in the area. This new reserve is larger and deeper than any existing marine reserve on New Zealand's three main islands.

This 4686-square kilometre sanctuary extends 45 kilometres north and south of the Kaikōura peninsula and 56 kilometres out to sea. It protects the sperm, humpback, southern right, blue, killer and other whales that frequent the area and prohibits high-level seismic survey work.

Extends 700 metres along the coastal side of State Highway 1 out about 50 metres to the low water spring mark, covering an approximate area of four hectares. This area is the most significant breeding colony of New Zealand fur seals on the country's main islands. Public access will be restricted to the viewing platforms to give the estimated 3000 seals in the area respite from human interference.

Recreational catch and size limits are to be tightened within the Te Korowai area due to concern about unsustainable pressure on fishing stocks. Tighter catch limits will apply to blue cod, rig, paua, crayfish, cockles, karengo and bladder kelp.

The NIWA produced video below represents a number of clips that have been spliced together to illustrate the abundant life associated with the muddy seabed sediments in Kaikoura Canyon at 1000m. The video was shot in 2006 using NIWA's Deep Towed Imaging System which was operated from the RV Tangaroa during the RENEWZ I voyage that was conducting an exploration of the chemosynthetic ecosystems of New Zealand.

A DOC information page on the Kaikoura Marine Management System